Gijón, another way of seeing this city

Gijón, one of the most important cities of the Principality of Asturias, it becomes one of the attractions in summer with a great affluence of tourists coming from all over the world who look for new experiences visiting “la tierrina” (one of the nicknames that the region receives).

This city stands out not only for its surroundings or its beach but also for its culture and the history behind it. One of the best ways to get to know its culture and history is to perceive it through the art that surrounds this city. That is why we propose to make the route described below.

In this route it is recommendable to stay in an intermediate point, therefore Gijón Surf Hostel appears, located 2 minutes away from the nearest beach and characterized by the good atmosphere that surrounds it. It is important to mention that this hostel has been catalogued among the 10 best accommodations in the world according to the Hostelworld website and whose bases are always committed to the environment. It has good communication with the city centre with a bus stop just a few metres from it.

The route consists of two stages.

It would start in the harbour, where we would find a sculpture of the letters of Gijón which are a tourist attraction and it is almost obligatory to take a photo with them. From here we would walk along the pier towards the breakwater and the second stop would be the sculpture “the cider tree” in which exactly 3200 green glass bottles try to give shape to a kind of tree; all with the same objective, to become aware of recycling.

In front of this sculpture, we find the statue of Don Pelayo, a real emblem in this region because after the famous battle of Covadonga the period of “the Reconquest” of Spain against the Muslims begins.

A little further on is one of the favourite places for young people to drink “culines de sidra” (typical Asturian cider), “la Cuesta del Cholo”, where you can enjoy beautiful sunsets.

Going up to the “Cerro de Santa Catalina”, originally an ancient Roman villa and in the second half of the 20th century a military barracks, two sculptures can be seen: “El Nordeste”( the northeast) and “El Elogio del Horizonte”(The Praise of the Horizon).  The first one was made by Joaquín Vaquero Turcios, and the work tries to recreate the most expected wind in the city that assures a sunny day. “El Elogio del Horizonte”, a work executed by Eduardo Chillida, was built after buying the land from the army and is located above a bunker used in the Spanish Civil War. Once placed under the Praise, you can hear the breaking of the waves.

Going down the hill in the opposite direction is located the church of San Pedro, the Roman baths of Campo Valdes and the statue of Octavian Augustus, Roman emperor who had to come to Asturias to end the wars of Rome against the Cantabrians and Asturians. 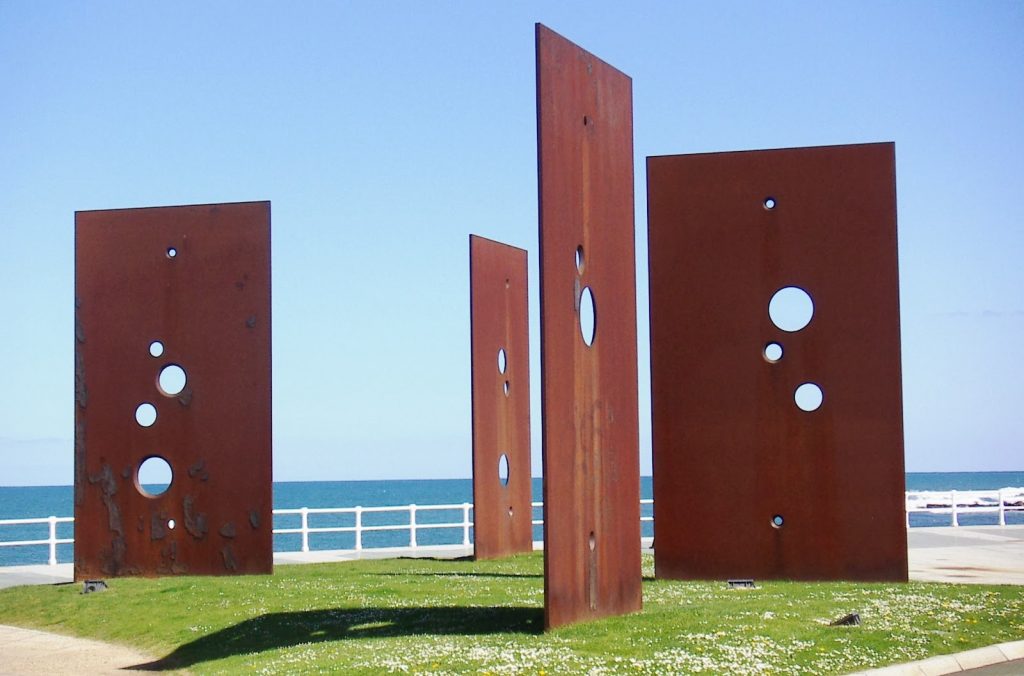 Continuing along the San Lorenzo beach walk, popularly known as “el Muro” and which is approximately 4 km long, we arrive at the Tourist Office and the popular “Escalerona”; between the 18th and 19th stairs of San Lorenzo we will find the sculpture “Sombras de Luz” (known as “las Chaponas”) made by Fernando Alba Álvarez, formed by four vertical steel plates that are oriented each one of them to the four cardinal points, and which have been perforated several holes through which the light is filtered in a different way. This stage would be concluded with the ” Reloj de Sol” (Sundial) and the monument to “la Madre del Emigrante” (the Mother of the Emigrant), also known as the “Lloca (crazy in Asturian) del Rinconín”), made by Ramón Muriedas. “La Lloca del Rinconin” is an overwhelming piece of art that represents the reaction of a mother to see her children leave waiting for her return which in many cases may not happen, that is why it is called “la Loca” referring to the fact that she was emotionally crazy because of the events that were happening. After doing this first stage it is recommended to take a break, in the case of staying at Gijón Surf Hostel, to take advantage of it to eat and later continue the march again. 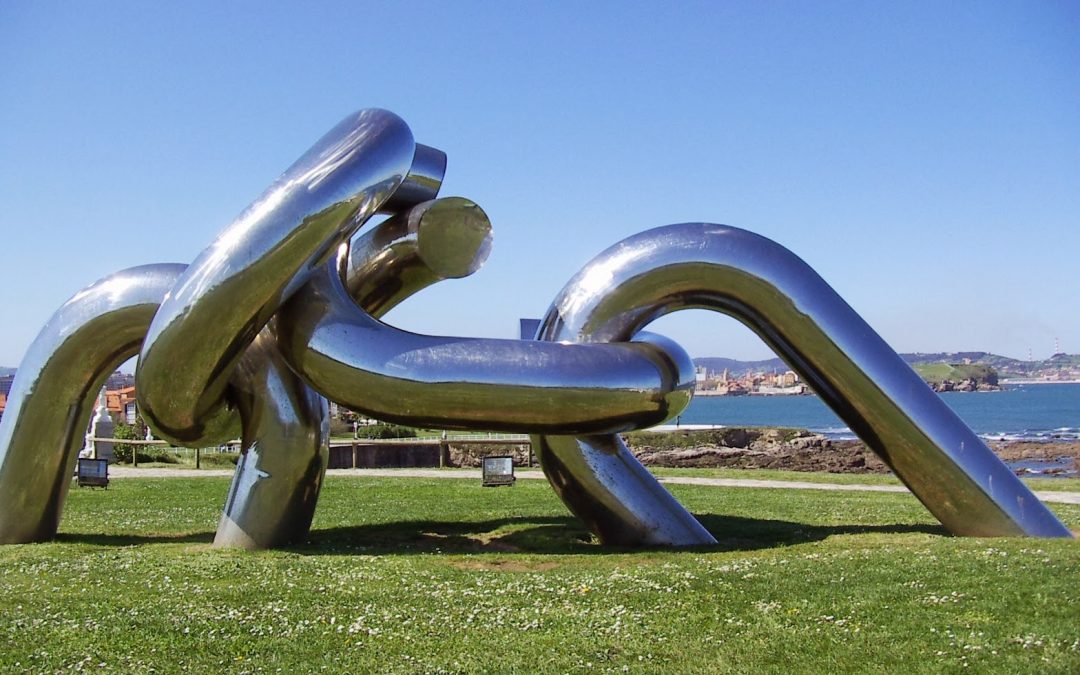 The march would be continued by visiting the sculpture ” Solidaridad “(Solidarity) located in the park of El Rinconín and created by Pepe Noja, it is made of stainless steel, Solidaridad is composed of several cylindrical tubes joined together representing union and freedom. Following the route the next sculpture will be “los Cantos de los Días Huidos” (the Song of the Fleeing Days) also known as “los mármoles” (the marbles) made by Adolfo Manzano; the author tries with this work to symbolize the small lost things that once were part of our environment for it is carried out using nine blocks of marble piled unevenly.

Further on, we have the penultimate stop, the monument “Nunca Más” (Never Again), considered historical heritage, it was made in honour of the victims, especially Asturian people, who during the Second World War perished in the concentration camps. Located in an open-air, this monument and its surroundings try to transmit freedom and solidarity. Walking along the beach of Peñarrubia and approximately 15 minutes we will be at the last stop where we can find the viewpoint of Providence where we can admire not only Gijón but also its coast from another perspective. A few metres away there is a sculpture in honour of Galileo Galilei. 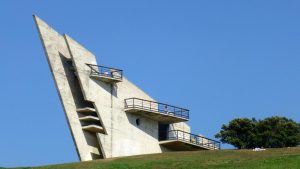 This route of more than 7,5 Kilometers and a half will allow us not only to do sport but also to understand the history and culture from another point of view, enjoying the meaning of the sculptures and the beautiful views that the walk offers us when bordering part of the Asturian coast. Another positive point would be that its duration is approximately 2:30-3:00 hours. A duration not very prolonged and if we add that the stay in the hostel will allow us to practice the various activities it offers. Finally, and to conclude the day, it’s always good to visit one of the cocktail bars located near the hostel, characterized by good music and good atmosphere.